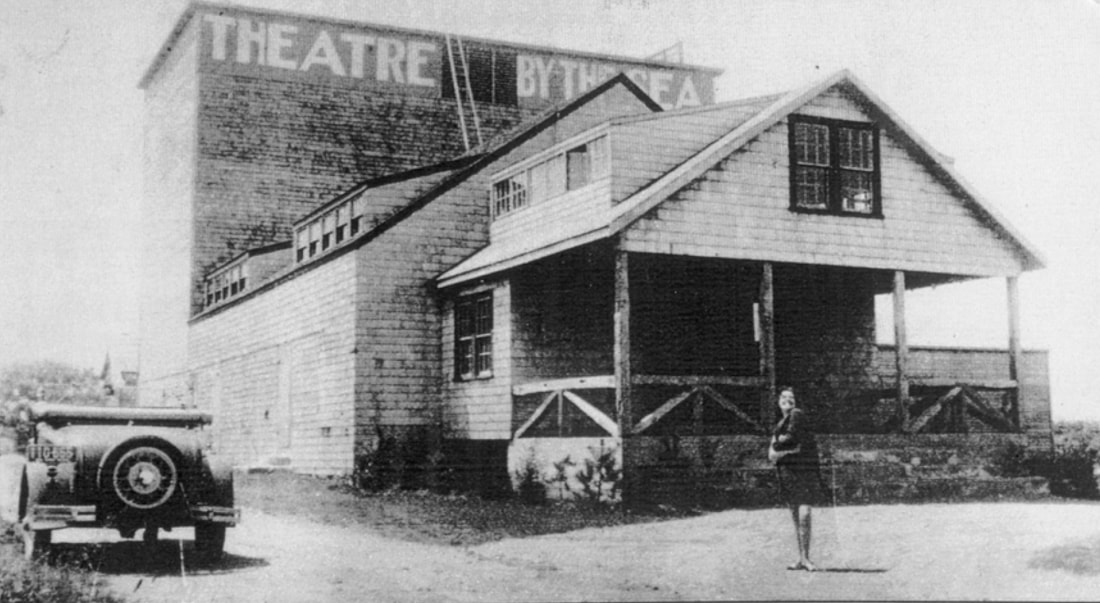 THEATRE BY THE SEA, which is on the National Register of Historic Places, has had many incarnations over the years. The Tyler family purchased the property in the early ‘20s. After Alice Tyler was left a widow with three young children, she ran the property as a summer camp for girls. When the depression hit, she decided to create jobs and provide a future for her children by turning the barn into a theatre. The 300-seat theatre opened on August 7, 1933 with a production called Strictly Dynamite. That initial season lasted four weeks and featured four different plays, one of which was taken to New York. In 1938, a Yale Cooperative took over. Then, on September 2, a hurricane hit. The back wall of the theatre caved in and the stage roof was blown off. During the repairs, the theater was expanded to include a balcony. The newly enlarged theatre operated through 1941 and then went dark during the war. In 1946, the theatre’s most glamorous and star-ﬁlled period began. The theatre became what is referred to as a “star-system” house opening with a show called Dream Girl which starred Judy Holliday. Other headliners who were brought in included Tallulah Bankhead, Mae West, Groucho Marx, and Marlon Brando. Following the 1958 season, the property was sold to the Bontecou family, who leased it sporadically for several years, and by 1966 there were plans to tear down the theatre. Upon hearing that the theatre was to be destroyed, Tommy Brent, who had previously worked as a publicist for the theatre, returned and saved the theater from demolition. His ﬁrst show opened on June 23, 1967 and he ran the theatre successfully for twenty-two years. In 1988, FourQuest Entertainment, which consisted of Laura Harris, (who had previously worked at the theatre for eleven summers), Renny Serre and Richard Ericson, came on board. Following extensive renovations, FourQuest reopened the theater in the spring of 1989 and continued producing high quality summer theater in Matunuck until the fall of 2003. The theatre went dark once again until 2007, when entrepreneur Bill Hanney purchased the property and, with producing partners, successfully mounted a production of A Funny Thing Happened on the Way to the Forum, just six weeks later, reopening the historic theatre on August 8, 2007. Theatre By The Sea continues to annually produce a successful four-musical subscription season along with a children’s theatre and concert series.

​Theatre By The Sea Land Acknowledgement

Theatre By The Sea would like to acknowledge the Indiginous Narragansett People, as the land we are currently on was their ancestral lands until disease, war, slavery and colonization displaced them from their homeland.

​We recognize our obligations to this land and to the Indigenous people who cared for it.

As we work toward diversity, equity, and inclusion, we acknowledge our need to decolonize our systems by including Indigenous people and perspectives in our productions, and within our casts, staff, and our artistic and leadership teams.